The AOP Library contains the foremost collection of astronomical literature in Ireland, ranging from a 4th century astrological treatise through to contemporary textbooks on astrophysics and space science. It is housed across several buildings, the principal collection being shelved in the main Library adjacent to the Observatory.

Library Loans
Contemporary books and journals may be borrowed by AOP staff and visitors but must remain on site and the loan must be recorded on the AOP Library Loans Register. Items should be returned as soon as possible after use, and placed on the “Library Returns” for resolving.

Library Catalogue
The library catalogue will soon be available to interrogate by author or title.

Image: The reading room of the AOP library, also used for seminars and meetings.

The emphasis of our contemporary collection is on books that support AOP research. These include textbooks and monographs that describe current theory, methods and practice and are essential  for training students and young researchers. Conference proceedings provide snapshots of research in different fields at different times.

Image: Proceedings of symposia of the International Astronomical Union.

AOP holds near-complete runs of most major astronomical journals, including the Monthly Notices of the Royal Astronomical Society, Astronomy and Astrophysics (both series) and the Astrophysical Journal, as well as many early journals no longer in print.  The Irish Astronomical Journal was launched and published from Armagh between 1950 and 2000. Most of the pre-20th century holdings are not available in digital form on public archives.

Image 1: Early volumes of Astronomy & Astrophysics, the Astrophysical Journal, and Transactions of the Royal Irish Academy at AOP.

Image 2: The Irish Astronomical Journal, published in Armagh between 1950 and 2000.

In days when communications were slower, most observatories circulated preprints of papers submitted to mainstream journals well in advance of their publication. Others would print and circulate tables of observations. The AOP library houses unique archive of such communications dating from the mid 19th century and from all over the world. Most would never be published in formal journals.

Image: Tables of astronomical observations published by the Royal Greenwich Observatory during the 19th century.

Image: Part of the constellation of Andromeda in the Bönner Durchmusterung, a star catalogue and atlas published in 1863.

The library includes two volumes from the early printing era, dated 1499. There are seventeenth-century tomes by Kepler, Hevel, Galilei, and Lubienietz. Successively greater numbers of eighteenth and nineteenth century volumes are also included.

Facsimiles of several rare books are available for inspection, but you’ll need to be good at Latin to make much sense of them!

A major collection of books on popular astronomy once belonging to the author Mary Proctor, including many of those she wrote herself.

The annual report of the Smithsonian Institute contains an eclectic range of scientific articles on every topic from astronomy to zoology. Following a request from the Keeper of the Armagh Public Library, Rev. Wm Reeves,  editions from 1862 onwards , along with miscellaneous scientific reports, were regularly sent to Armagh.

Image: From Mathesis, Book 2, chapter 29, sections 8-10: a treatise on astrology by Julius Firmicus Maternus written around A.D. 334-7. The edition in the AOP library was printed in 1499 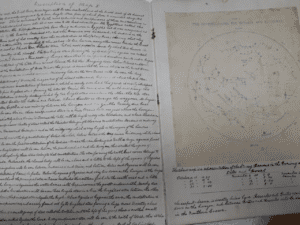 Image: Pages from a manuscript of Sir William Peck’s 1883 book “The constellations and how to find them: a popular and simple guide to a knowledge of the starry heavens”. This book would be reprinted many times well into the middle of the 20th century.