Noctilucent Clouds are cirrus-like high altitude (~82km) clouds normally visible only at night during summer months from latitudes 50-65 degrees north. They are believed to be composed of ice crystals which reflect the light of the Sun shining from below the observer’s horizon.

Noctilucent Clouds (NLC) were first reported by Backhouse (1885) and Jesse (1890) from observations made in 1884-5, following the huge volcanic eruption of Krakatoa in 1883. This led to a widespread belief that they were caused by volcanic ejecta. Later studies have suggested that they are more likely to be composed of extra-terrestrial particles which, as they descend through the atmosphere to the vicinity of the mesopause, become coated with water ice (WMO Report, 1970). 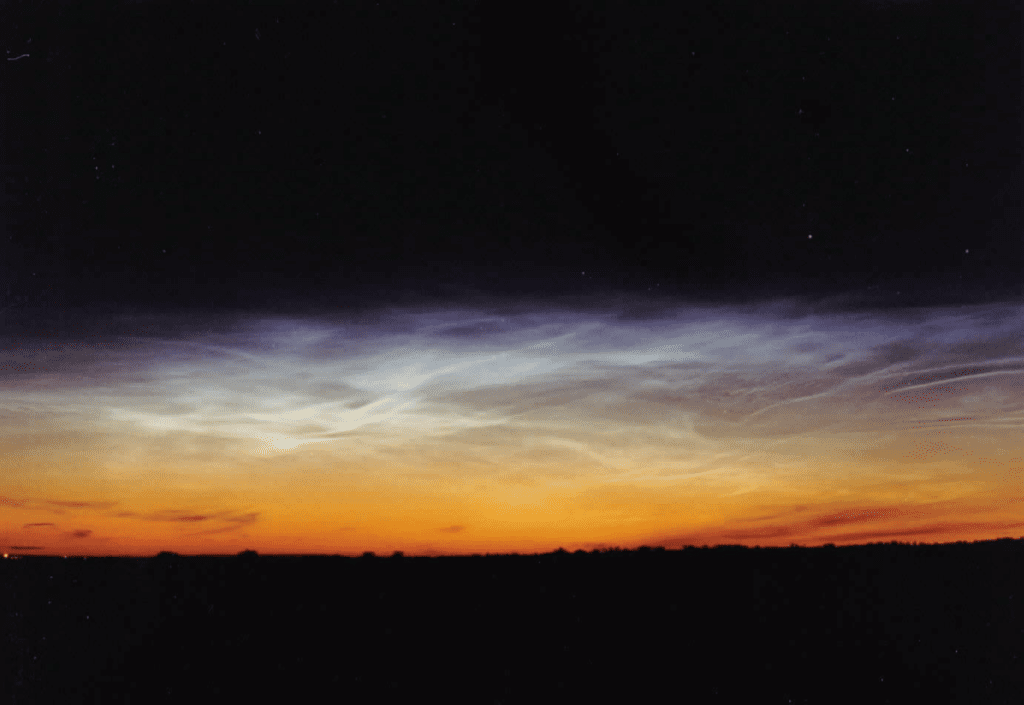 NLC are known to be highly variable in frequency with a preference to occur near sunspot minimum. Suggestions that long term trends in the frequency of occurrence may be related to human influence on global climate change have been questioned by von Zahn (2003) who has shown that such trends are heavily influenced by observational selection effects. As von Zahn has pointed out, the single most significant quantifiable characteristic of NLC, namely their altitude, has not changed over the 120 years they have been observed. Nevertheless, in the overall study of climate change, due to their high altitude, it is of interest to know if indeed long term changes have occurred.

The question has been posed by Gadsden and Schröder (1989) and others as to why, considering the long history of astronomical and meteorological observation, NLC were not seen before 1884. In search of earlier reports, Gadsden (1982) brought our attention to the possibility that NLC had been seen by Thomas Romney Robinson before they were identified as a distinct natural phenomenon. Robinson, who had more than a passing interest in meteorology (see Bennett, 1990), was reasonably well placed at Armagh (54º 21.2′ N, 6º 38.8′ W) to observe them.

Thomas Romney Robinson, third director of Armagh Observatory, best known by meteorologists for his Cup Anemometer. From a painting by Maud Humphrey – with permission of Royal Irish Academy.

In the Scientific Notices of Arago, published posthumously in 1854, there is mention of comments by Robinson on the topic of luminous clouds. Arago wrote:

(translation: Mr Robinson has announced to me that he has himself, in Ireland, made various observations on the phosphorescent properties of ordinary clouds. It is greatly to be desired that this learned astronomer communicates these without delay to the public.)

Gadsden (1982) was interested to know whether Robinson had indeed published or otherwise communicated to the public any account of these observations. Robinson died, almost blind, in February 1882, just a few years before the outstanding displays of NLC in 1884/5, unaware of the interest later shown in these unusual phenomena. To date we have found no published account by Robinson and regrettably almost none of his correspondence survives at Armagh. Here, we present what evidence exists in the meteorological records of Armagh Observatory that some of Robinson’s luminous clouds were in fact Noctilucent Clouds.

From a search through the daily comments recorded in the Armagh Meteorological Record Books from 1794 to the present (M117 Butler and Hoskin, 1987), we find that the term luminous clouds is used only during the relatively short period 1849-1852. There are ten such references on different nights, most of them in winter months November-March. Only two entries are in late spring-summer, both of them in May 1850. Possibly the winter observations relate to nacreous clouds which, though extremely rare, are seen in that season. The two records in early May are more likely to be NLC, but only one of these is clearly unusual, that on 1 May 1850, when Robinson wrote ‘strange luminous clouds in NW, not auroral’ (see image to the right). The entry three days later ‘some luminous patches of cloud or aurora behind’ suggests that on this occasion he was not so certain about his previous qualification.

Three questions arise in respect of these observations:

Some support for the identification of the 1849-1852 observations of luminous clouds as those reported by Robinson to Arago comes from the fact that they were seen just a few years prior to the publication of Arago’s notes. Arago died in October 1853 and his notes were published in the following years by Barral (1854-1862).

Regarding the dates of observation; the first week of May is rather early in the year for NLC to be seen – they are usually seen from mid-May to mid-August and most commonly in June and July. Nevertheless, early May is within the season of visibility for the latitude of Armagh (See figure 1, WMO Report, 1970).

How closely do Robinson’s descriptions of the phenomena fit our current knowledge of NLC? From the daily classification of clouds recorded by the Armagh observers, it is evident that they were fully conversant with the various tropospheric cloud types – therefore they would have recognised luminous NLC or nacreous clouds as unusual. Also, they were completely familiar with aurora as no fewer than 43 separate references to aurora occur in the daily records from January 1849 to December 1850. As Gadsden and Schröder (1989) have pointed out, few of the other supposed pre-1884 observations they were aware of actually stated that luminous clouds had been seen, only that there was an unusually enhanced brightness of the sky which could easily be due to diffuse aurora. The fact that Robinson actually used these words and specifically excluded aurora in one of his records would support Gadsden’s hunch that the observations Robinson reported to Arago represented a genuine early recognition of these rare phenomena.

Whilst it is unlikely now, at this distance in time, that we can ever be sure that what Robinson observed in May 1850 were in fact NLCs, there seems to be sufficient circumstantial evidence to favour his case.

The formatting of this paper has been slightly modified from the original for the context of this website. For the PDF version, follow this link.

The author would like to thank Jill Speers, Eimer Dunne and David Fee, work experience and summer students at Armagh Observatory for help in searching the Armagh meteorological records. Research at Armagh Observatory is grant-aided by the Department of Culture, Arts and Leisure for Northern Ireland.